It’s official: The U.S. government will soon regulate the distance between airline seats.

One provision that’s attracted the most attention is the “Seat Egress in Air Travel (SEAT) Act,” which directs the FAA to set standards for the size of airline seats. The agency has one year to come up with minimum requirements for seat width and for the space between seats.

While many have praised the bill as an attempt to keep airlines from further shrinking seat sizes, there’s no guarantee that’s how it will play out. The FAA will have to come up with regulations on minimum permissible seat sizes on commercial flights. But it’s unclear what rules the agency might ultimately adopt. It is possible that the FAA’s rules could ultimately end up codifying the tightest seating arrangements already offered on U.S. airlines.

So how much have airline seat sizes shrunk in recent years? 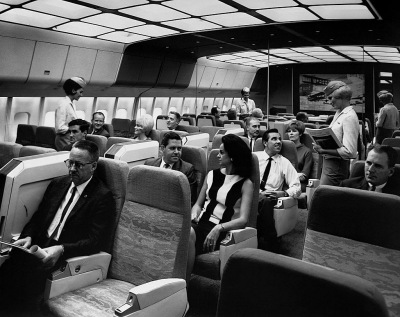 Exact specifications for older aircraft are hard to come by. Only after passengers started feeling the squeeze did the media start keeping track of legroom and seat width. But economy class “pitch” on these early jet airliners – the distance between two rows of seats – generally ranged from 34 to 36 inches.

The Boeing 707, for example, which entered service in 1958 and is widely credited with ushering in the “Jet Age”, offered 34 inches. So too did the first 747s, operated by the likes of Pan Am and TWA.

This started to change in the Eighties. In 1981, the New York Times reported that manufacturers were, for the first time, starting to cut seat pitch in economy from the “industry standard” of between 34 and 35 inches to just 32. A McDonnell Douglas executive tried to justify the changes. “With newer, less bulky seats, you might get as much legroom with the 32 inches pitch as you would with the 34 inches,” he claimed.

So began the ongoing trend for increasing profits by squeezing in as many passengers as physically possible.

The Consumers Union, a US watchdog, began keeping tabs on seat pitch in 1985. Its records clearly demonstrate how America’s four biggest airlines (American, Delta, United and Southwest) have cut legroom over the last three decades. In 1985, Southwest offered as much as 35 inches, while United’s upper limit in economy was 36. None of the four went below 31.

At a glance | How legroom has been lost

How low do they go?

Just how tight can seat pitch get? The 29 inches found on Virgin Atlantic’s A330s is pretty rare for a long-haul airline, and only applies to eight seats on each of three A330-200s. In January the consumer magazine Which? examined more than 30 carriers and only found two that offer less than 30 inches on long-haul flights: Virgin and Thomas Cook Airlines. The website SeatGuru reveals a few more, such as China Southern, WOWair (Iceland), Lion Air (Indonesia) and Vanilla Air (Japan).

Long-haul flights | The best and worst airlines for legroom

For short-haul flights it is another matter. Dozens now offer as little as 29 inches, including BA, Vueling, EasyJet, Jet2.com, Norwegian and Aurigny, while some have taken things even further and dropped to 28.

Short-haul flights | The best and worst airlines for legroom

Members of the 28 club, which offer the stingiest legroom in the sky, include the following:

The issue of width

Economy class passengers have lost up to eight inches of legroom since the so-called golden age of flying. But manufacturers will regularly suggest that it is seat width, not pitch, that really matters when it comes to comfort.

A spokesman for Boeing claimed that “single-aisle airplane seat widths have remained constant for over 60 years. They are the same width since the 707 opened up the world for economy class passengers”.

Research, however, suggests otherwise. In 1985, according to the Consumers Union, none of America’s big four airlines offered less than 19 inches of width. Now, 17 inches is the norm, and United goes as low as 16.

At a glance | How seat width has shrunk

Seats are shrinking, they are being squeezed closer together, and airlines are packing more of us into the same space.

Travelers hoping the Department of Transportation will just shower them with good will and comfortable seats are probably being naive. They are much more likely to side with the airlines and simply set 29 inches pitch and 17 inches width as the minimum acceptable sizes. Those who would like to see a better outcome would do well to contact the bureaucrats in charge and request a public comment period, during which travelers could request a little more room. Here’s their contact information: